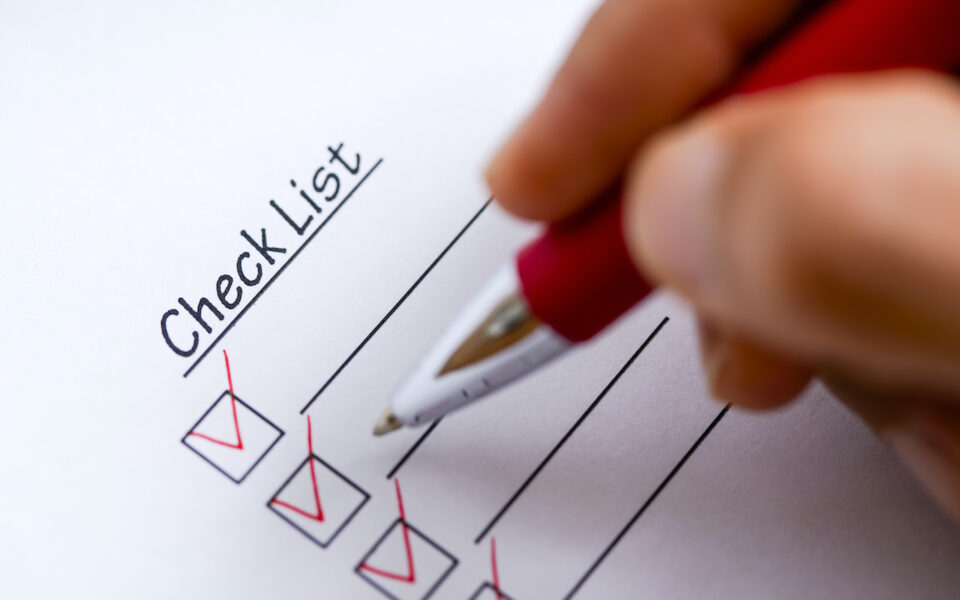 The Checklist is Killing Us

There’s a liberal progressive “checklist” out there and it’s killing us. What do I mean by that? I mean that the far left is not just suggesting that we accept their ideas but bullying us into accepting them. They’ve got a checklist. Either you accept their ideas or you’re done. If you don’t you’ll suffer. And that could mean anything from being criminally charged for “hate speech” to fines, job loss, and public shaming that could end your life as you know it. Does that sound fair, or democratic? No? Well that’s because it’s not.

The Checklist is No Small Thing

The checklist is killing us. It’s destroying our culture. And along the way it’s taking our rights and freedoms from us. But it didn’t happen by accident, and it didn’t happen without help. In the early 2000s, our national institutions got on board. Banks and corporations started kowtowing to it radical leftism.They promoted the LGBTQ agenda and force fed us D.I.E. They weren’t supposed to. If you’re a bank you are supposed to handle people’s money. If you’re Disney you’re supposed to provide wholesome family entertainment. You’re not supposed to brainwash our kids and promote ideas that the majority of Canadians either don’t care about or don’t agree with. But they promoted the “checklist” anyway.  Even the C.B.C., once Canada’s national broadcaster, went along with it and promoted liberal progressivism, all the while simultaneously revising our history and culture.

What’s Behind it All?

The plan behind the “Checklist” is to destroy society and replace it. The “Checklist” is a Marxist inspired attempt to remake us. you can see it everywhere. They talk about “redistribution of income” “smashing the 1%” “freedom from religion” and the importance of the state, all fundamental concepts in the Marxist playbook. Their aim is to eradicate western culture and, along with it, everything we value. The traditional family, Judeo Christian values, democracy, morality, law and order: all of it must go in order for them to achieve their utopia. Even common sense has to be swept aside.

One Point at a Time

They started with patriotism then moved to Christianity. After that it was traditional marriage. Then they re-introduced the idea of Communism. They had lost the cold war, so they rebranded it. It became “social justice,” a way to restart the game of class warfare all over again on behalf of “the oppressed.”  Marxism on the sly. And now they’re branching out. They’re introducing “Polyamory,” the thinly disguised attempt to eliminate the traditional family, the very foundation of our society. Lately, they’ve even begun to attack the suburbs, announcing that they are bourgeois and “white supremist.” But then these days virtually everything is “white supremacist.” What’s behind it? It’s the desire to replace free enterprise with Marxism. A rose by any other name.

Come on…people say. That will never happen. But remember all the things we once said would never happen? From gay marriage and legalized drugs to transgenderism, polyamorism, cancel culture and mass homelessness, they all happened. And they have all contributed to the weakening of our society. Now we are in the midst of what is perhaps our greatest struggle since World War 2, a continuation of the greatest war of all: the war against evil. During World War 2 the Allies cozied up to Joseph Stalin because they needed him to help defeat Hitler. For a while they even called him “Uncle Joe.” They underestimated him and found out later how truly evil he was. We can’t afford to do the same. Make no mistake about it. The “Checklist” isn’t fair, it’s evil and those of us who understand that must defeat it.

Sorry, gay marriage has weakened our society? How exactly does gay people getting married affect you or society at large in any way?

It has weakened the natural order of the family unit,father,mother,children. Every child deserves both a mother and a father.

It hasn’t though. You can still have a “traditional“ family unit while others are gay. These things aren’t mutually exclusive.

Also what about single moms or single dads? Is that weakening the family unit? People don’t have to follow your traditional definition of family and you haven’t lost anything by others having a different family.

True somewhat. But remaining in an early onset or progressively bad relationship is pointless in my opinion. Blended families commonplace now takes extra work nutureing a child into proper rearing. My 6 cent comments.

So should women stay in an abusive or unhappy relationship just because “God hates divorce”? Give me a break. Not all families have to follow the traditional model to be happy or successful. I’d rather a kid have two moms or two dads than an abusive dad and mom.

Yes, they should stay in an ‘unhappy’ relationship since that is a subjective term. Also our vows before God is “for better or worse … till death do us part”. ‘abusive’ is a very broad term. Separating for a while due to physical violence is NOT the same as divorcing. Divorce harms children. Those who care about their children more than their own personal happiness are to be commended.

Another great article. You are a gifted writer and make excellent points. Re: “the new secular religion of D.I.E. (Diversity, Inclusion and Equality)” the progressives (actually REGRESSIVES) who are part of this ‘religion’ are so diverse and inclusive that only those who are echo chambers of their beliefs are included. As for equality, they believe in the Orwellian idea of some being “MORE equal” than others. The sad part is that what you present is taking place on a World Wide scale and setting us up for the One World Government which will one day be ruled over by the… Read more »

Whose doing the “checking” these days? — the Royal Bank, the Cowichan Valley, the Nanaimo Ladysmith Board, The Teacher’s Federation, If they are using their list to excluded people they are violating the foundational tenet of “inclusion of all”.
How high handed is the left’s action and how hypocritical.

There is apt to be little conversation on the assumed violation.

So well said, Perry! Clear and concise. What we fail to appreciate is that when, as a society, we turn away from the Truth and we give in a little here, make a few changes there, that ultimately we end up somewhere that is utterly surprising to us! A case in point is the discussion below where the writer is asking how “gay marriage has weakened society”. It has done so by replacing a historically honoured and Biblically based foundation for marriage with a radically distorted ‘version’ of marriage that isn’t mariage at all! The goal was never to simply… Read more »

Not everyone believes in God, so how could everyone’s goal be to undermine God? God being real is your opinion, it is NOT fact and is NOT provable. It is simply your OPINION that gay marriage undermines God. Not true, not fact. Maybe you should try following his teachings like love thy neighbor and turn the other cheek, and not try to take others’ rights away. 🙂

Sorry I have had a serious health issue, so late getting into the discussion. Marriage as an institution, for all time in every culture, religious or not, was obviously between a man and a woman. I say obviously because it was meant for procreation and the stability of a civil society. Those who have submitted to the concept of it being otherwise, have had to redefine a centuries old understanding and legal concept of what constitutes a marriage. If an animal had feathers, two yellow feet, a flat bill and quacked, it was of course a duck. The farcical attempt… Read more »

Ironic how you ask for “true freedom for all” but want to revoke some of the rights of LGBT folks.

Great points Perry. Succinct and well thought out. There is a constant change in societal values and thinking with no end in sight. If there is no God and there is no Truth, then societies are built on nothing. They become ephemeral, transitory stories with no foundation, no underpinnings to construct a life upon. Thank God for His great book. People have so hated it they have for hundreds of years tried to invalidate it. Their failure to do so has served only to substantiate it. “Thy word have is a lamp unto my feet and a light unto my… Read more »