Previous postStepping Over the Line
Can You Recognize the Good?Next post 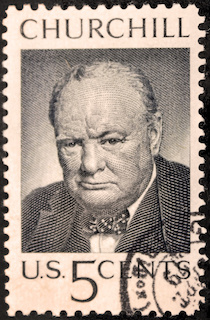 On June 4th, 1940, prime minister Winston Churchill gave the most stirring speech in the history of the English speaking world. In it he called upon his fellow countrymen to fight for their nation. He told them to fight on the beaches, in the landing fields and in the streets, and never to surrender. He reminded them that if the British Empire were to last a thousand years, men would remember them, and that this moment in their long and glorious history would be remembered as their “finest hour.”

A False Sense of Security

But the reality of the situation was different. Germany was more powerful than England. They had already rolled up the map of Europe and were triumphant everywhere. The English were ill prepared and not ready to go to war. They had been lulled into a false sense of security by Stanley Baldwin and Neville Chamberlain and were on the brink of defeat. The “Appeasers” in English government and society were ready to make a deal with Nazi Germany to avoid the terrible carnage of the First World War.

Churchill: The Roar in the British Lion

Many Englishmen felt that the situation was hopeless. They thought that the best thing to do was to surrender. Not Churchill. He said it was his duty to “Put the roar in the British Lion.” He knew that only a fierce, determined and, if necessary, all out last ditch stand, was essential if the British nation were to survive. He understood that the people’s spirit had to be roused, and that he was the man to do it.

However, he did not delude himself about the seriousness of the situation. The RAF was a fine fighting force, but it lacked planes and pilots. Dunkirk had been a “miracle” and a great show of national courage and resolve, but it had not been a victory. As part of that stirring June 4thspeech he warned the British people that “Evacuations were not victories” that the struggle ahead would be a long and difficult one, and that he could promise them nothing but “Blood, toil, tears and sweat.”

Their War and Ours

We all know the outcome. Britain survived the Nazi onslaught and went on, with Canada and America’s help, to win the Second World War. Churchill’s courage and dogged determination became a symbol of what could be done by brave men and women summoning the best they had in the service of their country and civilization. But what does this have to do with us? We aren’t faced with invading armies or defeat in a world war. That’s true. We’re not. But there is a war going on nonetheless, and we social conservatives and traditionalists are on the front lines. We stand in the breach with no assurance other than that which Churchill gave: That we will have to endure “Blood, toil, tears and sweat.”

What is our war then? It is a war against fanaticism and it is no less important than the Second World War, although much less overt. In our war, those who believe in the rights of the individual, and freedom of speech and thought are arrayed against those who would crush it forever. It matters little that the new fascists are on the Liberal Progressive left. It is fascism all the same. It matters little that instead of guns and bombs they use censorship, political correctness, and crushing legislation. The effect is the same. Freedom and human rights are crushed. The forces of Liberal Progressivism want to enslave us, not to serve a Nazi super state, but to an ideological master that will make us hesitant and afraid in everything we do and take away our freedom forever.

It was the spirit of Winston Churchill and the British people that finally prevailed and saved Western Civilization. It would not be until 1943 that the tide would finally turn and the Allies would begin to win. In the long, hard, crushing years between ’40 and ’43 the British and their commonwealth allies, and eventually the Americans, hung on defiantly and fought on to eventual victory. We conservatives and social conservatives should do the same. And we can learn from them the vital lesson of what can be accomplished when a determined people refuse to surrender. Eventually, over the horizon of history, victory arrives. To quote the shortest speech Churchill ever gave, which happened to be to a class at Harrow in 1941.

You hit the nail on the head again. Radical leftist wish to impose a fascist system on us. One point left out is that the new fascist system is in bed with another fascist system that has a religious component and that system is Islam. As a follower of Jesus Christ my response to all this is Titus 2:11-15 https://www.biblegateway.com/passage/?search=Titus+2%3A11-15&version=NIV .

Well done Perry. The parallels between what is happening in Canada and the rise of fascism in Europe have been evident to us for a long time. It is frightening to see the same lethargy, appeasement of those who seem so strong with their condemning opinions and simple ignorance of where the Liberal Progressives want to take us that allowed Fascism to take such a deep hold on Europe in the 30’s, being displayed in Canada. Yours may be a little voice just now, but every person speaking truth is adding to the cumulative ‘roar’ of the majority of Canadians… Read more »